Thali Nights has started 2016 in a new location.

Now based in Santa Eulalia in Ibiza, we hope to offer an insight into a type of Indian cuisine that has not been seen on the island before.

We will be offering tuition sessions or our “Social” experience to island residents.  Having completed a number of these events in the UK we believe that it is something fun and unique for Ibiza.  Anyone who enjoys and is interested in Indian food should experience a Thali Night.  Please take a look at the How It Works page for more information on what we offer.

With the chilly evenings here in Ibiza, a nice, home-made, authentic Indian curry is a perfect way to keep yourself warm.

Please get in touch with us on any of the contact methods listed on the Contact Us page if you are interested in learning more about what we have to offer.

Also, you will see more information, photos and reviews on our Facebook page, so please search for “Thali Nights” and give us a “Like” and a “Share” to spread the word. 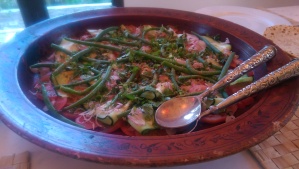 Saturday 11th April saw Thali Nights providing our Social experience to a young (or not so young) man who has recently turned 30 and his guests.

A party of nine, featuring friends and family of varying ages and cooking abilities waited with baited breath to see what was in store for them as the evening stretched out before them as part of an epic journey of Indian cuisine discovery.

On the whole we had a group of excited participants ready to throw themselves into a fun evening of good food, one or two drinks, and a dash of education.  The menu featured poppadums with chutneys on arrival as well as some stuffed chillies to provide a bit of a kick.  We then prepared some delicious lamb samosas as well as a chicken and spinach curry, tomatoes, potato curry and some green lentils.

This was supplemented with a refreshing cucumber salad and some rice.

We were aware that our party host was a slightly competitive chap, so we introduced a little spice quiz, followed by samosa making and rotli rolling which were judged by Trishna with prizes to be awarded at the end.  Technique and end product was appraised, with the guests enjoying varying degrees of success.

As we were making the samosas we were frying them as soon as the were made, and then straight onto the plate to be enjoyed, with some mint sauce, or coriander chutney by the team who made them.  The job satisfaction for the guys involved was great to see.

We followed this with the mesmerising rotli rolling task, with Trishna showing the guys how to roll one of these delicious breads/eating utensils.  This formed the final part of the competitve element of the evening with some great efforts by all the guys and girls involved.

All this tomfoolery meant that we had nine growing appetites on our hands.  This meant one thing…time to serve up.

Trishna and I finished up in the kitchen making sure everything was looking and tasting fantastic before serving the hungry throng.

Everything went down extremely well, with very few leftovers.

Next came the moment of truth.  Time to announce the winners of the big competition.  We actually had a runaway winner.  Matt was a revelation.  His samosas were filled and shaped to perfection, full marks on the spice test as well meant that he could relax in the rotli rolling and allowing the mother and father of the host to dominate the rotli round.

Prizes were distributed, cheers were raised, and a good time was had by all.

Time to start looking forward to the next one.

If you are interested in holding your own Thali Night, please don’t hesitate to get in touch. 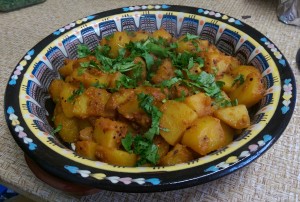 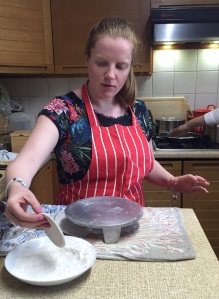 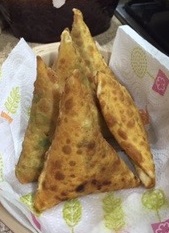 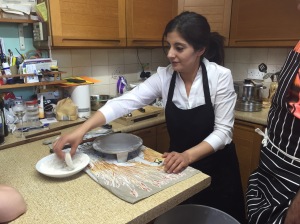 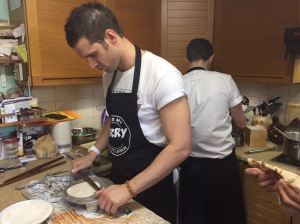 We are looking to get going in 2015 with a couple of marketing/networking parties over the next few weeks.  As a result we are on the hunt for some lovely volunteers who would be interesting in hosting a party.

We will come and provide the full Thali Nights service at a reduced rate, all that we ask in return is that the host can invite a number of like-minded people who would be prepared to take a full part in the evening and then spread the word after the event about how they enjoyed the experience and just how brilliant holding a Thali Night is!

Also if anyone has a house with a big kitchen, or knows of a friendly restaurant that would be interested in being the venue for a Thali Nights press evening, then please let us know.

We are preparing to launch our new business, Thali Nights, offering a catering/tuition service for people to learn how to make authentic, home cooked Indian food in their own home.

If you are looking to hold a party with a difference, we will come into your home and teach you how to cook a delicious Indian meal, which you then sit down, with your guests to eat.

You can see more details on this website, and if you would like any further information please do not hesitate to ask.

This is a new venture for Trishna and I, and as a result we are looking for some people who are interested in having a party where we come along and cater the event for you, at the same time as refining our techniques and skills.

So if you would like to have a good time, as well as help us get this new adventure off the ground for us, please get in touch.